Somebody is walking over my grave!

Somebody is walking over my grave!

The rather odd expression 'somebody just walked over my grave!' is usually uttered when a person experiences a cold, sudden shudder. So why do people say it? It stems from an old folklore tale which suggests that experiencing this sudden sensation is caused by walking over the place where one's grave was eventually going to be.

I wonder if Richard III ever experienced that sensation when walking over the land that eventually turned into a Council City car park in Leicester? I wonder if his body would have ever been discovered if Philippa Langley hadn’t experienced an ‘odd feeling’ when visiting the site in 2004? 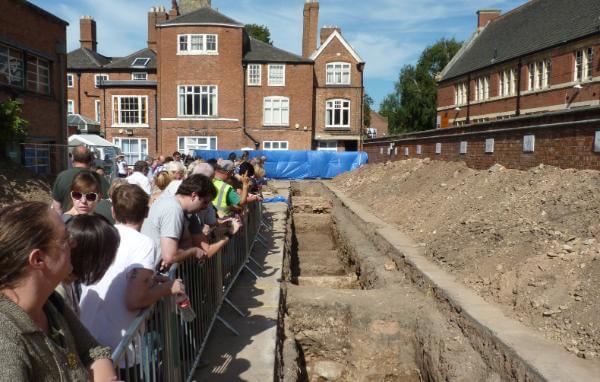 Philippa Langley fell ill during 1992 and decided to give up a successful career in advertising to try her hand at penning a film about the controversial English King. After much research, Langley and the Richard III Society felt strongly that Richard III had been misrepresented by Tudor publicists. Whilst she agrees that there was brutality under his reign she reminds us to consider this in the context of a time in which the entire landscape was feudal and barbaric.

Richard III was killed in 1485 at the Battle of Bosworth and there was much debate about what had happened to his remains. Rumour had it that they were thrown into a river though others speculated that he had been taken by the Grey Friars to be buried in their friary.

In 2004 as part of her dedicated research, Langley visited Leicester in the hope offinding further information about the place Richard was rumoured to be buried, around the site of the Greyfriars church. She found her time there unproductive until she was just about to leave. As she was walking away she noticed a car park with a private barrier across it and felt "an overwhelming urge" to go inside. "In the second parking bay, I just felt I was walking on his grave," Langley recalls.

She decided to leave Leicester and return home but a year later, she re-visited the car park bay to test if she had the same “overwhelming urge”. The feeling returned. However, on this occasion someone had hand-painted the letter ‘R’ over the bay to mark it as reserved, or perhaps ‘Richard’? This was all Langley needed as a cosmic sign that she "needed to get on with it" and set off on her mission.

Despite many doubters, Philippa raised £34,000 for a two-week dig, more than half of which was donated by the Richard III Society located in Leicester. Supported by Leicester City Council and academics from the University of Leicester, Langley proceeded with an archeological dig of the car park. The unimaginable happened. Just as she had predicted, there lay the remains of Richard III. Right underneath the R in the car park bay where she had first had an overwhelming sensation.

The King’s remains were reinterred in Leicester Cathedral in march 2015 just opposite the site of the new King Richard III Visitor Centre, which draws tourists from around the world.

Escapologic® Leicester is just meters from the wonderful visitor center, on the corner of the very same Grey Friars, and St Martins. It too holds many secrets and surprises. What could you discover in Leicester?